- there will be changes. #Oilers

- As it stands today before free agency, the lineup is looking to be as follows:

I say one should always keep Nuge and Ebs together.  Hall looks like he wants to play with McDavid. Yakupov I'm not sure although he was clicking with Roy--one can imagine he'll have more clicking with a super wizard.  If he doesn't improve this year, I could see a trade happening by putting someone with more size and experience in that spot from a team tight on cap space.

The third line is perfect for those guys and Chiarelli has already discussed putting Draisaitl on the wing.  Really though, he and Lander could switch back and forth between the dot and the boards.

I get the feeling though, that the defense is going to look differently real soon here with Nikitin being an odd man out.  The Oilers may look to get some value from Ference by the trade deadline before he decides to retire or goes UFA in two seasons--making the D look like this by March:

That looks a bit meaner.  It's slowly coming together although I'd prefer Reinhart and Nurse to spend another year in the AHL until they utterly dominate, which will make Fayne expendable.

- If there's one characteristic that Chiarelli is bringing to the Oilers is his faith in ensuring the majority of the players are big and/or strong.  MacT was on the right track as GM in understanding that to win in the West, heck the whole league, you needed to be tough--something the Oilers have not focused on since the puny days of Hobbiton under Lowe and Tambellini where they thought it was all about speed.  Well you can't get the ring if you're not equally tough.

- Why is size important, especially now?  Essentially, these tough players will just check the opponents, open the ice up for McDavid to take the loose puck and zoom towards the net.  Sounds like a plan to me!

- But we should also note that he's going to need protection.  Think about how much Syd gets targeted and was targeted during past playoffs runs.  The beauty here is even if Connor gets targeted by key opponents, that opens things up for Hall, Nuge, and Ebs.  That said, the worst thing to happen would be a McJesus injury.  If only he could call on the Hockey Gods and the Holy Grail quickly to heal any wounds.  We will see?  Hahaha!

- Speaking of that McJesus nickname--I shalt only used it aboveth onceth, and will never useth it againeth.  Everyone knows that the selfless Ryan Smyth was and is the Oilers Jesus.  You can't have two.  So you may hear me call Connor McDavid "The Anointed One" as I have done before.   Praise Thee to Thy Smytty. Forgive those who use Thy name in vain, forever and ever. Amen. 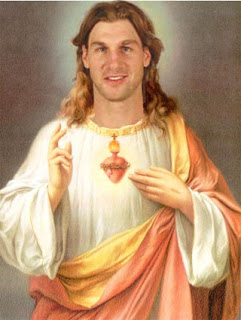 - Speaking of Smytty, last season, the Oilers lacked tenacity and standing up for their teammates. Remember?  That culture has to change.  They need to get mean and why many of us can't wait for Darnell Nurse to break the lineup. This is why I'm thinking softies like Purcell, Nikitin, and Schultz aren't going to be around and will be replaced with meaner players, although less skilled.  Lander became quite agitating and a pest--total opposite of the previous year.

Anyhoo, let's look at the draft picks and moves from this past weekend.

C Connor McDavid. Let's not forget, The Anointed One (see, it works, doesn't it?) is 6'1 and pretty big for an 18 year old, but needs to bulk up a bit more to prevent injury.  He knows that. He also admitted he needs to get into the corners and battle. So humble.  This week, the club will give him and all players a regiment to train on before camp.

D Griffin Reinhart. The former Oil King Memorial Cup captain is 6'4" and big.  Yes, everyone is concerned about his stint in the AHL last year and lacking foot speed a la Whitney, and many thought this trade had MacT and Lowe written all over it, but head of player development and former Oil King GM Bob Green was insisting that Reinhart, the former #4 selection will bounce back and bring toughness.

G Cam Talbot.  He's a big goalie who moves well and the best possible one of the bunch the Oilers could have obtained.  Big win here.  It's risky though in that he's only got 57 games but he remained consistent, albeit behind a stellar Rangers defensive core. That said, he comes cheap and if he plays well, will want more coin the following season.  Slats apparently said he wanted to help his old team.  Aw.  Here's a puppy dog.

Leafs forward Brad Ross and a #107 pick for Martin Marincin.  Rumours over Marty getting traded have been around for months. I'm a fan of Marincin and his simple but effect game, but the reason he didn't make the cut last camp was because he didn't train much and get bigger over the summer.  This is where MacT and Chiarelli likely seee eye-to-eye on.  If he was to be traded, I think we were all hoping it would be in a package deal.  Brad Ross?  Never heard of him. So much so that he was not signed today and will be a UFA.

D Eric Gryba. The 3rd-pairing Senator got the short end of the stick. It's not that he's a bad player--but again, he's huge and right-handed and will effectively start with the Oilers.  Sending Travis Ewanyk and that previously obtained #107 pick was a good deal as Ewanyk wasn't ever going to see ice time.

D Caleb Jones. Finally an actual draft pick. Seth's brother will hopefully pan-out like Seth has.  Hahaha. Just kidding.  He won't, but is going to be back with the Portland Winterhawks next year.

D Ethan Bear at #124.  Just by reading his name, I wouldn't want to mess with him.  He's another big, tough shutdown player.

G Miroslav Svoboda at #208.  I thought we'd be adding Russian goalie Samsanov at #16 so it was high-time they added one, albeit quite late in the draft if you ask me.

D Ziyat Paigin at #209.  I'll be honest, as many of you know, I'm not a big fan of the defensemen coming out of the Russian development system. If you look around the NHL now, young Russian d-men aren't exactly tops.  And looking at the Oilers Russian experiment with d-men in the last couple of years, it just hasn't panned out at all.  Perhaps it's something with adjusting to the small ice, less room, and more pressure.  But this guy is big.  Well, so is Nikitin.  Just sayin'.

Overall, there's an obvious shift in focus and culture here in a team now being built around McDavid, Hall, and Nugent-Hopkins with a better long-term support crew.

But there's still a gaping hole in the top defensive pair, which Chiarelli will hopefully address on Wednesday's start of free agency with the big cap space of above $13-14 million to play with.  Mike Green please!

My next post, I'll look at the potential lineup going into this season.  Let's hope that McLellan doesn't putz around like Eakins did and has a team ready after the first couple of pre-season games.

The Road to Connor McDavid Eve


Hey, welcome back. It's been since 2013 that I've posted here when it was called Hatrock's Hockey Blog. For the 2014 season, I was a regular poster on The Hockey Report .net, but that site got changed, and I decided to post just on a new Facebook Page called Oil & Gas, but it's limiting, so here we are and here we go!

The excitement in this city is nothing like I've felt in years.  Some Edmontonians are so excited, this morning they went and added "McDavid" to the "Connors Road" sign down in the River Valley. Clever bunch. Also noting they put #EPSStrong.

So, just as we had Wayne Gretzky Drive replace Capilano and Mark Messier Drive up replace some guy's name in St. Albert, why do I now get this feeling that Connors Road will eventually become Connor McDavid Road?  Is it just me?  It does go uphill from deep in the valley, curves along, has lane controls, has FolkFest, and skiers, is currently being totally repaved from the mess of potholes that inundated it for years, AND it will eventually have the Valley Line LRT on it.   So it's a quite fitting symbol considering the trek through the wilderness that Oilers fans have been subject to for the past 9 years.

There is a cover band in town called Connors Road. I wonder if they'll change their name too?

Anyway, as The Holy Annointed One hob-knobs with other draftees in Miami this week, and although everyone knows new GM Chiarelli will select him, you can't help but be equally excited about the big changes in the Oilers organization itself.   No longer can Leaves fans (yes, I prefer the proper English usage of the plural of leaf) say that the Oilers will ruin McDavid as they did with Hall, Nuge, and Yak because it's now an actual professionally-run hockey club.

To review the big changes:


So, yes, we can be excited for drafting McDavid on June 26, but we should also be equally excited about the big sweeping changes to the org itself, which by the way, I correctly predicted once I heard Katz hired Bob Nicholson to begin with.

And for some strange reason, I can't help but thank Dallas Eakins, MacT and Todd Nelson for ensuring the Oilers ended up third last, so we could have that last lottery ball go in our favour.

OVERTIME CHANGES!
Remember when games finished in a tie and we'd go "ho hum". These seemed rare back then as there was more scoring (a.k.a. excitement) and Gretzky would mock teams calling them "Mickey Mouse". Remember those glorious times? Remember?
Well now "Dead Puck Hockey"--trap-style defenses perfected by late-90's New Jersey is the mantra with teams like Los Angeles, Minneapolis, Arizona, Nashville, and Tampa Bay. And it's bloody and painfully boring. Actually, I'd prefer some blood, so it's just boring--especially during the supposed exciting playoffs. Yay, my team won 2-1 by taking no risks and playing a 1-3-1 basketball-style zone defense. It's why I'm glad Jon Cooper's Bolts didn't win the Cup.
Then there's the shootout. I love it and hate it at the same time. For one, there are way too many games going to a shootout (reason: see previous paragraph). Then there's the ones that go a million rounds and Marty Marincin finally pots one. Say what? A shutdown defensemen?
So after a successful trial run in the AHL with 4 on 4 for 3 min and 3 on 3 for 4 min overtime and fewer games going to a shootout, NHL GMs have approved the use of a 3 on 3 overtime for the upcoming season with board of govs approval. That's good news, but they also need to make wins worth 3 points. I did the analysis and only a couple of teams would have benefited and two would have not, and only slightly, so it's worth doing.
So which team does this benefit? Why the Oilers of course. With a swath of young, fast, skilled talent, imagine Hall, McDavid, and Klefbom on the 1st unit and Nuge, Ebs, and Schultz on the 2nd unit, and few teams will be able to keep up.
"Dead Puck Hockey" takes one to the face.
Posted by Mike B. at 4:39 PM No comments: