The Oilers should do the smart thing

Ever since Rebuild 1.0, the Oilers have had to use rookies in top positions to fill the void left from management unable to find the right free agents, the right draft choices, and not even having a sole farm team to plop those drafted players into for development until they were fully ready to hit the ground running to play in the big league.

That scenario put new coach Tom Renney in a difficult position to find that balance between "protecting the kids" to winning, knowing they were the better players on the team.  Then injuries ensued and the Oilers had to call up almost half of the Oklahoma City Barons roster to fill in.  Renney knew the real reason he was fired was because he knew the management was terrible in not providing him developed NHL-ready players.  What was he supposed to do?

Two coaches later, nothing really changed much.  When you look at the drafted and developed players who went from the AHL to the NHL, the Oilers cupboard is pretty bare.  Not only that, there were many first round top draft picks, including #1s that didn't even play in the NHL.  Look here to see the carnage.

Here's a list of the players since 2007 who at least had some regular minutes and where they are now:

Of those non-#1 draft picks only Kevin Lowe's picks of Sam Gagner did not start in the AHL. (Of course, many drafted had to complete their years of junior hockey.)  Everybody else had a shorter or longer stint in the AHL.

I would argue that if the Oilers had a deeper organization from better drafting, then there wouldn't be a need to rush these other picks onto the team.

So, what to do with this years' #4 draft pick 18 year old right winger Jesse Puljujarvi?


Many would say he will make the NHL this year, but the history shows that he will have to play more junior/other league. He's only 18 and only if you are from the CHL do you have to be 20 to play in the AHL, so he can be sent down.  He needs to get used to the smaller rink and the heavier style of play here.  There's no doubt that he will be impactful NHL player.

The question is, for how long should Puljujarvi play in the minors?

In looking at the right side of the forward lineup as far as experience and where they should be playing:


So essentially the Oilers are not really deep on the right wing of overly impactful players.

If Yakupov does get traded, Chiarelli himself told a friend of mine that he's only been offered a 4th round pick.  If that's the case, then it leaves a hole on that 2nd line to be filled by a veteran free agent. Names like Vrbata pop up.

Ideally, Puljujarvi would play a season or two in the minors in North America.  Then he would easily slide in on a middle six role.

Let's hope the newerish management sticks to their guns and doesn't rush this player.

who can take a pass from his leftside partner, skate and move the puck to his blue line and pass up to a streaking McDavid tape to tape, forehand to forehand, let alone a good shot on the powerplay to open up the zone even a wee bit for McThreadTheNeedle.

The angle from a left-shooting guy, even on the right side of the ice to the middle lane is tighter than from an ideal right-shooting player, especially if he's near the boards or is using his body to protect the puck between him and the boards.

It's why Eberle plays so well with McDavid, why Kurri and Gretzky were pure magic, and why having a lefty-to-righty skilled pairs is virtually vital to playmaking in hockey.

Having Tyson Barrie from the Avalanche, a 24 year old RFA who is now in salary arbitration, was deemed by coach Patrick Roy as a 5th defenseman. His value is much more than that.

From http://ownthepuck.blogspot.ca, we can clearly see Barrie is a top pairing offensive defenseman. 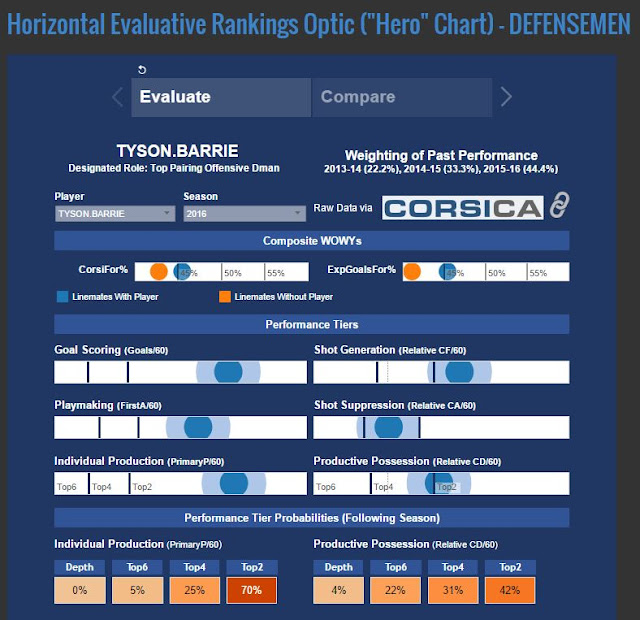 Peter Chiarelli declared that he's happy with the team lineup now.  I don't know a single Oilers fan who is though.  He has to say that in case he's unable to make a deal.

But that doesn't mean Pete's not going to keep working to make it even better and more ideal.  That's why he offered the Avs Benoit Pouliot, Nail Yakupov, and a 1st round pick, but it was apparently and obviously turned down as the Avs would want a decent defenseman in return.

It can be argued that Barrie is better than Larsson and would garner more in return than Taylor Hall, say Nugent-Hopkins + Brandon Davidson/Darnell Nurse + 2017 1st Round Pick.

Listening to Bob Stauffer on Monday, he thinks as Barrie's arbitration goes on, his trade value goes down as the Avs will want to unload him more instead of lose him to free agency.

He then suggested that a three-way deal with Anaheim might be in store with Fowler going the Avs.  Fowler is not nearly as good as Barrie but makes a little more $4m to $3.2m.

Barrie is even better than Sekera ($5.5m) so he'd have every inclination to demand at least that.  And the Oilers could afford it.

For the expansion draft, teams can protect 7 forwards, 3 d-men, and 1 goalie, or 8 players and a goalie. Players within first 2 years of pro hockey are already protected.  If a player has a no movement clause, he counts in one of the declared protected players.

If Barrie is traded for, you'd want to protect him, so that would expose Klefbom because you'd still want to protect Larsson wouldn't you, and Sekera has a no movement clause.

So maybe, just maybe you trade Klefbom for Barrie straight up because you're going to lose him anyway if you bring Barrie for other players.  Las Vegas would be nuts not take Klefbom.