Oilers running out of gas by Trade Deadline? 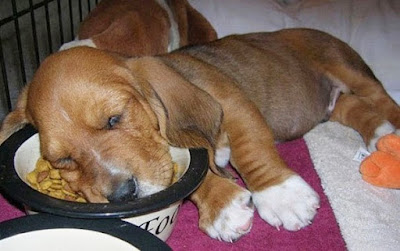 I'm seeing a tired team out there.  Just over a year ago when McDavid returned from a 35 game injury, Leon Draisaitl, who had previously been lighting it up with Taylor Hall, fell off the map.  His conditioning level didn't seem to keep up with the other players.  He wasn't skating as well.  His scoring touched dropped.  (DSS) Drai-Settle Syndrome was here.

This aspect of his game worried me back then and it's been worrying me for a couple months now.  He's giving away the puck more.  He's leaky on defense.  His faceoffs have been terrible.  These are all indicators of a tired player, perhaps slightly injured one.

Don't let it surprise you that, yes, many players have been stick-hacked to near death by this point in the season--where their wrists, forearms, and shins all have bruises on top of bruises.

And this is what pisses me off about the NHL reffing this year.  It's been horrible.  They've allowed or missed all these hacks and slashes because the players are taking matters into their own hands to hold opponents accountable.  The inconsistency of penalty-calling has been atrocious, so much so that the Flames organization had to meet with the refs to talk about why they're penalized more (not that I mind the Flames being penalized more, but they're only 4 points back of the Oilers.)

And those offside challenges.  Yikes.  Brutal.

The Oilers need to be careful and not take so many lazy penalties, especially with inconsistent reffing.  Getting called on a lazy penalty means you're tired.  Then coupled with tired penalty-killing units, you're doomed because you're not as focused, nor as threatening as a defender.

Road trips can do that to you--especially for Western teams and the much longer haul in miles travelled and Edmonton is one of the furthest.  Then think about the climate switch.  So many factors can nibble away at your ability to remain on your game.  It tends to happen to younger players who aren't used to the toils of a long 82 game season.  Draisaitl's not there yet.  Nor can I imagine is McDavid, Caggulia, Benning, and Klefbom--none of whom has yet to play a full 82 game season.

McDavid is likely an exception. He's superhuman. Nobody gets hacked as much as him though. No body.  He's literally a man of steel.  Teams are trying to find their krptonite against him.  Some succeed some periods, but most don't.  He actually finds a way on the ice to get at least a point per game.  His home is on the ice.  Just like Superman.  But don't anybody put him in the isolation chamber, so he can be human and love his girlfriend.  Please.  I don't know her name, but I hope it's not Lois.

But then there's the playoffs.  Grueling--especially mentally.  Now think about Talbot.  Is his game losing some lustre of late?  I'd say it's less consistent.  I worry about him too.

Veterans know how to manage all this grueling season travel stuff.  Look at Lucic.  Have you noticed he's upped his game lately?  He should know that the real season starts mid-April.

This is where some smart trades at the trade deadline can help.  While I don't expect Chiarelli to pull off a Maroon trade again, he must be looking at the following to fill the gaps, which are:


Who and what do the Oilers have in assets to trade for a rental without heavily deflating the roster?

Homestand
What the Oilers do have going for them in March is a huge homestand with a couple against the Avs, who are playing like their name. 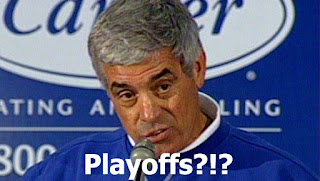 As it stands, the Western Conference playoff pictures looks like:

Either way you slice it, I predict the Oilers and McDavid will end up with the same number of points as McDavid's number, and they'll play the Ducks.  Thing is, who gets home-ice advantage?  Way too tight to call, but right now, at 63 games in with 19 remaining, the Oilers are on track for 96 points and McDavid 94, so both will have to slightly up their game to match my season-opening prediction.

Even then, if the Oilers want to beat the Ducks in the first round, which they can, they'll need more veteran depth to match with the Quack.

And this makes the play for Brian Boyle all that more important.  Make it happen, Pete.

Oilers back to old Oilering again vs. Bolts 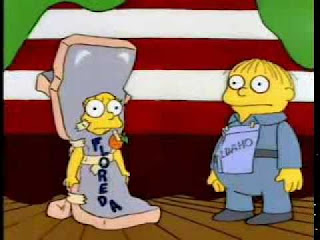 Why did they generate only 3 scoring chances all game?

Was it the confidence of the last three wins against Arizona, Philly, and Chicago?  Absolutely.

Brossoit?  No.  No it wasn't.  He played pretty darn well.  All those shots were tough and unexpected.

Was it the two days off?  Possibly.  The sun and weather in Florida can make you a little lethargic if you're not used to it.

Note how Draisaitl sauntered off during that line change which caused a 2 on 1 for Tampa.  If I was McLellan, I would have benched him for it.  Not acceptable.  Set an example.

Again, no one drove to the net.  No chance for a garbage goal against a team whose system, coached by Coop, is to go up a goal and play trappy and create a wall of defense so that you play on the outside and take soft shots (hello, Slepyshev and Caggiula!).  It's no secret I'm not a fan of Jon Cooper's boring system, so the way to defeat it is to take some tanks and bulldoze your way in there Looch, Maroooon, Kass, and Hendo!  That's how they beat Tippet's Trap in 'Zona!

After the game, the usual cliches were spoutedeth (<--, see, not a cliche).  "We need more urgency."  "We need to be better."  blah frickin' blah.  Meaningless.

Oilers never lose against the Panthers on their turf.  Swamp?  Everglades?  Keys?

GO TO THE NET.

Maroon-McDavid-Eberle (7) - Maroon got a goal at end of game. Line never got scored on, but Eberle still on the schnide.  They handled the McGinn-Burmistrov-Reider line quite easily.

Lucic-Draisaitl-Slepyshev (8) - The Draisaitl to Slepyshev to Klefbom goal was a thing of beauty. Didn't get scored on. They were pretty evenly matched with the Domi-Hanzel-Vrbata line.

Caggiula-Nuge-Kassian (6) - Line got scored on, well, Nuge did, but this line worked harder than expected and hit a lot, showed some chemistry.  Matched up evenly with the Perlini-Dvorak-Doan 3rd line.

Hendricks-Letestu-Pakarinen (7) - Hendo's goal was all hard work from all three. Got scored on. They had a minute or so against the Yote's first line and dominated them.

In watching the first period against the Yotes, the Oilers were chasing the puck, rarely gaining control.  They couldn't contain them physically either.  It was as if they were ignoring McLellan's systems.  Draisaitl gave glimmer that being in front of the net is where this game was to be won.  I was mighty pissed there were no fights or tussles.  Perhaps the Yotes knew they'd get their asses handed to them, so they didn't instigate.

As I said in my last post, the Oilers needed to attack the net and not send soft wristers from the outside as we all know the odds of scoring in front are much higher.  Let's look at each goal against the Yotes and see if my demand matches up with the result.

1. (5v4) Draisaitl took a pass in front from Lucic who was behind the net, shot-save, rebound, shot in front of the net, goal. Draisaitl's backhand control is one of the best in the whole world.

2. (5v5) Hendricks gobbled up a Pakarinen's kickshot off of Domingue's pad on left side and jammed it in from in front of the net. Classic garbage goal.

3. (5v3) Letestu took a cross-ice pass in the high slot from McDavid and one-timed it.  Done.

4. (5v5) Oilers began in their own zone after a beauty pad-save from T-Bot.  Draisaitl dipsy-doodled through the middle across the blue line, backhand-passed to Slepyshev on the right boards who very smartly let some defenders pass slightly by to open up a small passing lane, which he went tape to tape to Klefbom perfectly pinching on the left who buried the puck. This is one of the Oilers better goals of the year and where I absolutely love Klefbom and look forward to more from him here.

5. (5v5) Maroon had the puck behind the net and backhanded it to McDavid, who, like Froto, put on The Ring that makes him disappear to go through a couple people, then reappeared in another spot, to pass to Klefbom at the blue line.  Meanwhile, Maroon, plopped himself in front of the net, Klef shoots it, rebound, and Paddy falls shovelling the puck in for his 20th.  HIS TWENTIETH GOAL!

Here are the shot and goal locations courtesy of www.hockeyviz.com. 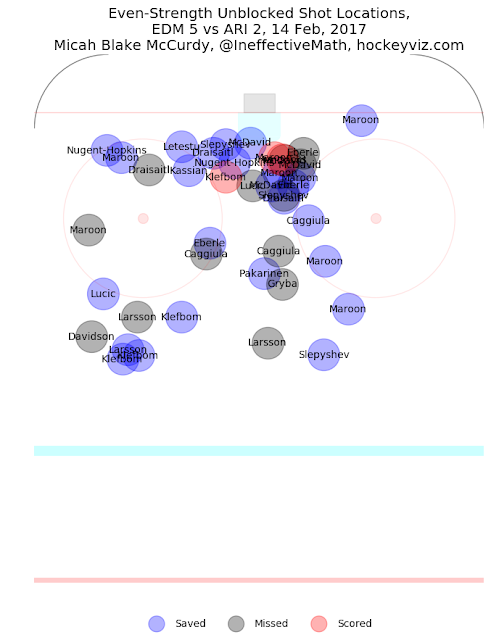 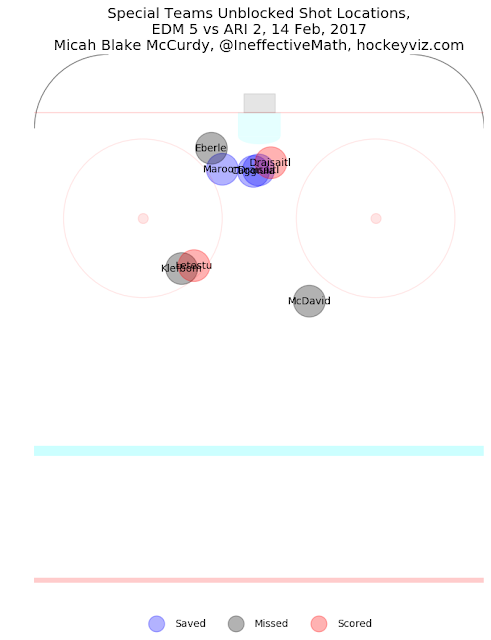 CONCLUSION
The Oilers took my advice obviously, were aggressive to the net on all 5 goals with 3 being in front of the net.  Any soft wristers didn't do jack.

This is the new Oilering.

Holy giveaway city.  Holy lack of scoring.  Holy goalie, Talbs.  What is going on?  Is it 2014?
There's been a belief by many that since Kris Russell has been on the team, they've been much better.  Well, he sure does block a million shots.  But hold on, he played like crap just before he got injured.
And now, defensively, the giveaways are back to curse them.  I always thought the curse was Rexall Place.  Is it overconfidence?
Good defense begets better defense from others, and obviously helps Talbot. When one or two cogs break down, the wheel can come off and roll down the stairs in Ford Hall over 104 Ave and right out into the pit where the Winter Garden is going to be.
When are the middle six forwards going to score?   Ever?  One goal every five games isn't enough.
My dad texted me from Arizona asking what's gotten into the Oilers?  And I said they are not being aggressive to the net.  When they're aggressive, they win. All these soft shots don't add up to jack if they don't do real damage.
That five day break got them a little too relaxed.  For McDavid, well, he seemed mighty relaxed with his lady on Instagram.
Hey, but Nuge got in a fight and handled himself, so there's that, right?
Posted by Mike B. at 12:06 AM No comments: