Oilers improve a bit after trade deadline - Why?

The Oilers have been playing much better hockey after the trade deadline.  It took them a few games to adjust to the new units and lines, but they appear to be hitting some sort of stride.  They look a little faster.  Is it because Nuge is back?  That's a big part of it, yes.  But he was here when the Oilers weren't playing well.

McLellan boggles my mind sometimes.  With Maroon traded for pucks, he goes BACK to using slumping boat anchor Lucic on McDavid's wing.  Well, for the zillionth time--it doesn't work.  So what to do?

Everyone called for Nuge to be moved to McDavid's left wing.  McLellan finally tried it versus the Wild and it worked.

Further, in the past six games, the Oilers have been on the penalty kill 13 times.  Only 1 goal!  That's a 93% PK.  Wait, what?  They must have been on the road as their road PK is much better than at home, right?  Nope.  Five out of six games were at home.

What's going on?  Seriously.  Is this really a "fire Johnson" thing?  Perhaps it's not.

David Staples over at the Journal - Cult of Hockey Blog was tweeting about one potential culprit and the improvement of another.

Mark Letestu as the culprit and Cam Tablot as the improvement.

Since 4C Mark Letestu was traded at the deadline for a faster winger Pontus Aberg, coach McLellan has had to adjust the PK units.  Letestu was already off the top PP unit with Strome filling in.

There was also discussion that the PK unit had too many lefties which opened the passing lanes.  Perhaps that's why Letestu was kept on, as he's a righty.  But so are Kassian, Larsson, and Pakarinen, so I'm not really buying that one.

Before we examine those PK units, let's start by showing how the PK did with and without Letestu.

Now what about Cam Talbot?  We need to look at his save percentage 5v5 versus on the PK.

In doing some further digging, I found this very interesting article at Copper and Blue regarding the "L" PK formation.  A lot of teams use the box or diamond.  Oilers don't.  Good power play teams figured this out and made the cross-ice pass to the weak side leading to a goal.  Talbot's better play last year covered up this glaring weakness.

Look below at where Letestu would be on the PK in an "L" formation (in this case a backwards "L").  He's likely at the top or in the middle on the left half-wall ("55" on right side in diagram below).  If teams get the puck on the half-wall, sure they can't swing it around the outside against the "L", but if your defender on half-wall doesn't get there in time or backs off, that leaves the entire weak side open for a shot, or action down low. 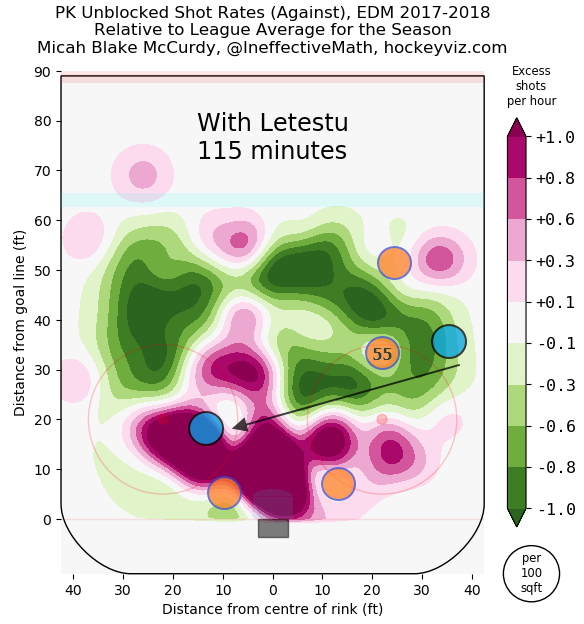 Leon Draisaitl isn't very good here either.  But then we have to ask, if the players can't adjust to the system, then either the system is bad or the player is bad.  If the coaches kept putting bad players on the PK, then that's just bad coaching.  But you have to ask if this "L" system is good at all when the Oilers have BY FAR THE WORST PENALTY KILL IN NHL HISTORY over the past year.  That can't be just the players, can it?

McLellan's stubbornness here and not employing the right lines until way after it was already a good idea certainly has made us armchair fans and media pundits cringe, but think of the players and losing their confidence in said system.  When they lose confidence in a system, they tend to not play as hard for it to work and it crumbles.  Think about Eakins' "Swarm" 5v5 defensive system.  Total disaster.  Players couldn't make it work.  They lose confidence in the system and then the coach.  Coach loses his mind.

Good coaches look at their talent and make the system fit that talent.  Amazing systems can take any good talent and make it work, but often, those systems are complex and require lots of practice.

In Letestu's case, last year on the power play, he was pretty darn good himself on the left wing weak side to take a one timer cross-ice pass from McDavid.  He even got a couple shortys on the PK.  He was also pretty good on the shoot out.  Something happened.  Age?  The league got faster?

So, as you watch the remaining games, take note of the Oilers penalty kill and watch for:

2.  Who is the middle forward defending the left half wall?  Is he covering that guy well and preventing a cross-ice pass?

3.  How's Talbot doing?  Is he pushing hard enough across when the cross-ice pass is made?

If special teams is solved with these minor tweaks, then Talbot will be better, and the Oilers can be better.  Not great, but better.