.. and that is why they lose to the Coyotes and Wild most of the time.  The youngins aren't used to playing against this defensive structure and are unable to penetrate the zone as well as they ought, create two on ones, or even get in the slot for a decent chance on net.

McDavid, Puljujarvi, Draisaitl, Caggiula, Slepyshev, Pitlick, Klefbom, Benning, Talbot -- an average of less than 82 games under their belt.  That's 9 of 23 players. But that's why everyone is pissed at Eberle. He's a veteran now and should know better.

Again, too many times over the weekend did we see wingers having to skate to the outside only to lob a softy toward Mike Smith, who will save shots like that 12 times out of 10.

I, like many of you, can't stand the trap, and it's killing the game.  I wish there was an illegal defense rule like the NBA has in preventing zone defenses, which are generally quite boring in basketball (except for the attacking arrowhead).

As an aside, on Friday, that Klefbom to Larsson goal was probably the best Oilers defensive goal I have seen in years.  That's what a playoff team should look like.
Posted by Mike B. at 10:55 AM No comments:

.#OilersNation
The game against Dallas saw Lander on waivers, injured Hendricks and Caggiula in, Pouliot and Letestu benched. This jumbled up the lines, but the result was a lot of chemistry.

Essentially, the Oilers now have four scoring lines that are well-balanced.  Four.  Every line has a skilled checker, a two-way centreman, and a skilled winger.
Firstly, let's just mention that having Lucic, Maroon, Kassian, and Hendricks is a fantastic slate of big, strong checkers but who can also play.  This is what the Oilers have wanted forever.

Line 1:
This was also the first time we saw McDavid and rookie Puljujarvi on a line together and despite my misgivings on the idea, it worked really really well with McDavid's first hat trick and Puljujarvi getting two assists. He's able to keep up with the captain, something no one else on the team could do.  Lucic is the Deputy here, but he needs to step up to protect his Captain. It's what he was hired to do.

Line 2:
This line held their own, despite no points.  I've always thought Nuge and Ebs should stick together with their history.  Eberle hadn't been working out as well for McDavid due to foot speed. Maroon can play on any line, score, fight, what have you.

Line 3:
Such a strange mix of players but it worked until Kassian took a dumb 4 minute penalty with the lead.  Slepy and Drai were able to provide assists to Klefbom's goal.  Many Russians prefer playing on their offside (Ovechkin, Yakupov) and while Slepy and Drai's forehand sticks don't match on passes skating forward, with a stop in the offensive zone and pass back to the defense, the puck is then protected on the outside with the boards, allowing you to even pass off the boards easier.

Line 4:
I love this line. It could easily be a 3rd line as well.  I won't miss Lander, but we all missed Hendricks.  He's the checker here and while he may not be able to keep up with The Drake and Pitty, those two showed excellent chemistry together.

All three lines can have a checker to get the puck and dish to a centre, who passes to a winger for a shot and rebound (Puljujarvi and McDavid) or pass and shot (Caggiula to Pitlick).

Pouliot hasn't scored in a very long time and Letestu has even registered a shot on net in forever.  McLellan isn't playing favourites, even for veterans, that's for sure.  I could see Pouliot slotting in for Kassian on the third line putting Slepyshev back on the right.

Despite the good mix, what the Oilers now lack are good penalty killers, which Lander and Letestu are.  This will be the difficult part going forward, so the Oilers need to stay out of the box and not having Pouliot and Kassian take dumb penalties, is likely why McLellan keep one of them out of the lineup.

With Lander down in Bakersfield, is Letestu now the 13th forward?

Everything I said would happen, happened

#Oilers #OilersNation
Do I know my Oilers or do I know my Oilers?  In my last post on November 4, I said the Oilers looked like they were shooting for the sake of shooting and if they only won 1 of 4 games on the Eastern road trip, that was a fail.  Here's what I said:

HypeOilers now sit 7-3-1 and are tied for first in the West.  They need to plug up their defensive positioning (as always) and they could beat the Islanders, Pittsburgh, and Detroit, but I get the feeling they'll only win 1 of 3 and go 8-6-1 after this road trip, which would be a fail and not living up to the hype that the start of the season provided, but more of the reality that many of us would expect--a team that perhaps squeaks into the playoff picture.

Why have the Oilers lost so many games lately?

It's complicated and simple.   Let's look at the simple.

1.  Injuries to defensemen -- Not having Kris Russell and Brandon Davidson has impacted the team the most and put more pressure on Klefbom to perform which he has been unable to do, which then creates a domino effect to Larsson and down the line. Sekera and Klefbom need to switch positions.

2.  Save percentage -- Poorer defense causes better chances by the opponent.

3.  Corsi -- The Oilers have been outshooting their opponents but losing.  While some goalies have been hot, more shots than usual are lofters and the team is "shooting for the sake of shooting" to somehow drive up the odds on scoring.

4.  Laziness -- I'm looking at Eberle, Lucic, and Pouliot who haven't been up to snuff lately.  This causes McLellan to line juggle, kill the chemistry, and cause discontent throughout the lineup.

5.  Right-wingers playing on lines above their level.  It can be argued that Eberle is no longer a top line winger.  Keeping Puljujarvi around was out of necessity since trading Yakupov and being unable to sign Kris Versteeg.  Thankfully, Kassian and Pitlick have stepped up well to pick up the slack but neither are really top 6 guys at this time, maybe for a little while, but not consistently.

On a complicated note, looking at 1. above, the continued process of scouting, drafting, and developing good defensemen in the AHL so they hit the ground running in the NHL is vitally important to a team's overall long-term success.  If Russell wasn't injured, Benning would be in Bakersfield, and if Davidson wasn't injured, Nurse would be there too, and Gryba would be the 7th defenseman.  This has a further trickle-down effect:

1. Centres need to come back more to help the defense -- they expend more energy as a result

2. Wingers perform 1 on 3 solo-attacks because the centres aren't around (except McDavid).  They don't get in the danger zone so all they can do is shoot a weak wrister.

3. Talbot has been getting better shot attempts on him because the inexperienced defense is out of position.

Injuries happen all the time.  The other players need to step up even more and save Maroon, Kassian and Pitlick, it's not happening.

Wow, that was a hell of a start.  Haven't seen that since .... 1986!   Flashes of Gretzky+Kurri started happening and then at the Heritage Classic we saw them play together again with Smytty and Messier and Anderson and Semenko and Roloson and Cujo and MacDonald and Huddy and it was oh so glorious. 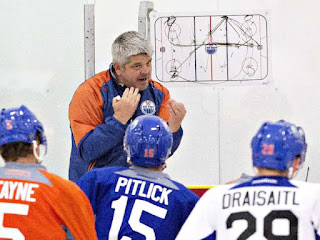 Before I continue let me give props to Matti Hagman--still one of the best Finns the Oilers have ever had and blessings to his family on his passing.  I'll never forget how really good you were.

Luck
During the hype and hoopla of the new arena, McDavid killing Calgary, Talbot standing on his head, his wife having twins, Adam Larsson proving himself quite worthy, and Kris Russel showing he's got (wait... we'll see), I was very concerned about the team PDO% (goalie save % + team shooting %) being at 106%.  The Habs were at 107%.  That had to come down naturally at some point. (100% is the norm and average.)

During the win streak, they were shooting the lights out and Talbot was crazy good.  And McLellan knew it wouldn't last, so he began emphasizing shooting... which for all you CorsiLovers and LA Kings fans is like the best thing ever.

So what do the players do?  They shoot from everywhere.  They, how did Eberle put it a year and a half ago after Eakins was let go, "Shooting for the sake of shooting."

Powerplay
A big culprit in that has been the powerplay.  We'd have beat Ottawa, the Leafs, and Rangers if the PP was better.  It's been the absolute shits.  I just don't understand Woodcroft's plays.  I don't mind the drop pass to charge the blue line and gain it, but after that, like WTF?

A big part of that are the defensemen bringing up the puck and I'm sorry to say but Nurse and Russell are better than Klefbom and Sekera.  And Lucic needs to plop himself in front of the net, cause havoc a la Ryan Smyth (who I am meeting on Thursday at his new Bar94 in Lux... eeeee!).

Anyway, here's how I'd deploy the PP units:

Or switch Nuge and McDavid.

Then the key here is to pass and attack the net to look for a give and go and to pull defenders in.  We used to do this and it worked often. There was so much movement happening, but the key was to ensure we still covered the points.

Pool Party
On Puljujarvi, I am surprised he wasn't sent down after 10 games.  I thought the organization had learned from the past about player development.  Perhaps singing Versteeg was to fill that hole, then trading Yakupov really opened it up and the #4 draft pick is here to stay.  He needs to stay on the 3rd line though.

4th Line is Tops
The 4th line will be the difference-maker in a lot of games as they have.  Lander is playing right where he should. Letestu plays better than a 4th liner but it's a 3rd liner, and
And whoever doesn't think Tyler Pitlick should stick should take a stick and shove it.  "He's like a dog after a bone." -- Dave Lumley on 630CHED.

Hype
Oilers now sit 7-3-1 and are tied for first in the West.  They need to plug up their defensive positioning (as always) and they could beat the Islanders, Pittsburgh, and Detroit, but I get the feeling they'll only win 1 of 3 and go 8-6-1 after this road trip, which would be a fail and not living up to the hype that the start of the season provided, but more of the reality that many of us would expect--a team that perhaps squeaks into the playoff picture.