After all the injuries and callups, I decided it was time to put some metrics to it, so I've been tracking the lineups for every game this year and comparing to an ideal lineup.

To assign the ideal lineup, each line/pair gets a value multiplier As there's no way we are comparing a top line McDavid centre to a 4th line right-winger, each line gets a decreasing ideal value multiplier as it is similar to ice time. So 4-3-2-1 value for forward lines and 4-3-2 for defense pairs.  Goalies too.  This multiplier is then well, multiplied to the sum of the players' value on each line.  For example, let's look at what was often the top line:

Make sense?  Good.  If not, have a beer, but you can't deny that this is a pretty good way to put numbers to when we armchair fans say, "We need a 3rd line centre."  Now of course, the player value rating is based on my observations, and other site stats on players showing where they should play. We're not idiots here, so let's move on, shall we? 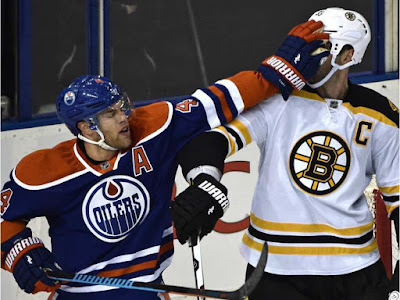 With the season over, I've calculated the averages and differentials for each position.  The chart is further below.

What I didn't include was line by line and pair by pair.  Let's look...

FORWARDS:
1st line right-wing, which was often Kassian or Pakarinen this year, normally 3rd and 4th line guys with a 2 value, brought that down.
2nd line left-wing, again, with injuries to Pouliot, this hole was plugged with bottom 6 guys.
3rd line left-wing was Korpikoski. I eventually kept rating him at a 0 as he shouldn't be on the team.
3rd line centre was Letestu most often because Nuge was injured, and Letestu is a better suited 4th line centre.
4th line centre was often Lander, who had a horrible offensive season, but wasn't a difference maker.

DEFENSE:
I'm not ready to claim that Sekera is a top pairing defenseman.  Not having Klefbom was a huge gap. With Nurse and Davidson playing more, that 3rd pair left side wasn't too shabby, but after Davidson's injury, Reinhart, Oesterle, Pardy, and Clendening were plugs.  And note that often, these lefties had to play the right side, which drops you a value point. 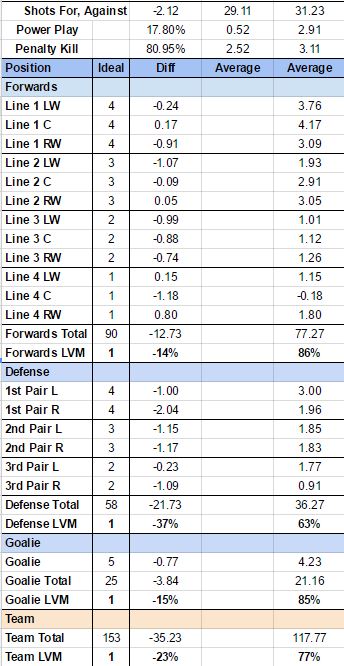 Anyway, this was a fun experiment that I will try and continue for next season, or when summer trades and drafting happens, I'll update.  Now, think about this lineup:

#Oilers POHO/GM Peter Chiarelli had a presser yesterday and I will say this again--it's refreshing to hear him speak because he sees what we see and gives clear evidence, not "visually better" excuses.

He laid out the season improvements but noted that it was "a taller midget".  Not the most PC-thing PC could say, but we got the point.  There was an improvement in Corsi possession in the 2nd half of the season--yeah, #BecauseMcDavid.

He said one and more likely two guys were untouchable.  This, too, is refreshing.  We are of course assuming McDavid and one of Hall, Talbot, and Draisaitl being the other.

After hearing Hall's post-season interview and his praise for McDavid, he seemed to be projecting that he wants McDavid as captain.  That's mature and humbling for him and it's not a slap in the face if McDavid becomes captain.  Messier had Gretzky as captain until the Great One was traded.

Pete "likes size" and noted adding Maroon and Kassian were good additions that way.  This is important to not because it has already changed the culture of the team to a more gritty style.  And now you can see guys like Hall and Yak getting into tussles more.  I think we can expect to see a couple more gritty-skilled guys added this Summer.

He was honest in his answer about backup Laurent Brossoit being called up to get a taste and that he needed to improve.  It appears highly likely that an NHL veteran backup goalie will be added and Brossoit sent back down to Bakersfield.  I can't help but wonder if goalie coach Schwartz is having a negative effect on goalies.  I mean, Nilsson was playing quite well then something happened.  Same with Brossoit.  Both are tall goalies and perhaps their style doesn't fit with Schwartz's ideas where Talbot's does.  I could be wrong and Brossoit and Nilsson just simply didn't follow Schwartz's techniques.

Chiarelli mentioned that if players like Nurse weren't called up early, it was because the defense and the team were playing better.  That said, I think he knew it was going to happen anyway.  I mean, when you start the year with Ference and Nikitin, to a lesser extent Fayne, and a pile of green rookies, what would you expect to happen?

Chia obviously sees the need to add not one, but two quality defensemen this off-season.  Names like Hamonic, Shattenkirk, and Vatanen have been talked about.  There are also UFA guys he can just sign like Alex Goligoski (DAL) 30yrs, 0.45 PPG, Keith Yandle (NYR) 29yrs, and Roman Polak (SJS) 30yrs to watch for, but I think they need right-shot guys, hence the original three names listed.

On the upcoming draft, it doesn't sound like Chiarelli is going to trade the pick--not with that amount of quality players this year in the top 5, but perhaps only if you can pull a top right-shot defenseman from another team.  If the draft lays out normally, Toronto would likely pick Matthews as their new centreman and rebuild from there with the Oilers selecting winger Laine, who is being compared to Mario Lemieux.

Say what?  I think if that happens, then you have your new core of McDavid, Hall, Draisaitl, Laine, Nurse, Talbot and this gives you room to move Eberle, Yakupov, and possibly Nugent-Hopkins for top defensemen.

Something has to give, or the Oilers will only get slightly taller.

Here are my thoughts on the day and attending the final Oilers home game at the Edmonton/Northlands Coliseum/Skyreach Centre/Rexall Place.


1st Period
2nd Period
3rd Period
Farewell Celebration
After all that, I went up to several senior coliseum staff members, shook their hand and thanked them for their service to the fans.

Lots of memories.  But too many losses in the past 9 years for anyone to take.  Let's hope the Curse of Rexall Place is gone.

The Curse of Rexall Place 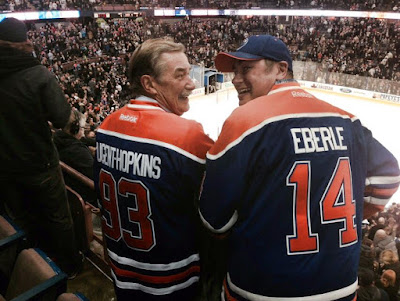 While I will miss the memories of Oilers and Oil Kings games and the many concerts, this crazy fan won't miss the old barn we know as .

Admit it, the building is just a big round hunk of concrete.  It's the memories in that space that we are celebrating.  Every team in the league except one (hello Calgary!) has moved into a new building.

The LRT station doesn't connect directly to the building.  Cheap parking sucks.  The seats are small. The concourse is narrow.  The washrooms are old.  The concessions were dull.  The downstairs bars, while having fantastic staff, didn't exactly offer a wide variety of draft or cocktails.

And worst of all, during concerts, the sound echoed too much.  It wasn't designed for concerts, as much as they put in those hangy sound blockers from the room.

Let's not forget that Northlands Coliseum had a sister building in Vancouver.  Yeah, they left that place a loooong time ago.  Didn't anyone really care?  No.  Why?  Because Canucks fans don't care about their hockey in general anyway, and no Cups were raised on home ice there, so I bet most Canucks fans don't even know about that building.

So that's what we're really celebrating here, isn't it?  The Cups.

Once again, after the 30 year reunion last year and this season's Glen Sather tribute, we old time fans have certainly been inundated with these old memories.

Since those 5 Cups, the only real big memory was the 2006 Stanley Cup game 6 win against the Carolina Hurricanes to send them to the final and deciding game.  The building has never been as loud and proud since then. The Paul Lorieau anthems. The sound. The smell. The energy.

Since that 2006 Cup run, we saw great players with heart and soul sent out the door by Kevin Lowe and Co. Pronger, Smytty, Smith, Souray, Roloson, the list goes on and on and on.  The 2006 team was magic, lunch pail underdogs, that won over fans from around the world.  That's why we loved them with all of our heart.  Then the heart was ripped out and bad karma took over.

And it never left.

Hey, don't get me wrong, it's great to reminisce and all, but I want something new to celebrate so we can all prove to the rest of the league and the hockey world, that we fans who have hung in there no matter what, will eventually get rewarded with our deep loving faith.  At least we hope.

But what memories have their really been since then, since that amazing time where Oilerism became a new religion?

I've had a few.  Every single game I took my dad, girlfriend/fiancee, or best friend to go see the Oilers I vividly remember.  I remember the great wins.

But I mostly remember losing and sadness.  There was streak of about 8 games I went to a few seasons ago where they didn't win a single one of them.  I thought it was me.  Now we know it's not even the coaches.

So it pleases me that there's a new building with a whole new energy that will be created by old fans, by new fans, and by new players.

Our children will be able to plant their face against the glass and feel the hockey energy that is Connor McDavid like I used to do when I was 10 years old in the front row.  They friggin' deserve that--not old memories they have absolutely no connection with.

The curse MUST be lifted.  A new era MUST be born.  This is OUR Oilers.  OUR city.

We want our HEARTS back.