Oilers on track to reach my prediction of 97 points

I've predicted that the Oilers and McDavid will end up with the same number of points as McDavid's number.

How are they doing?

Connor McDavid?
82 points in 72 games = 1.14 ppg
On track for 93 points total.
He'll need four 3 point games to catch up.  He could very well do it against the Avalanche.

This is all not to say that I wouldn't be excited if the Oilers got more than 97 points, which I think is entirely possible, including catching up to the Sharks and taking 1st in the Pacific.

At the 18 games remaining marking, below is my points prediction compared with reality.

I said that Oilers would beat teams below them in points, split points from teams that are close to them, and lose to teams that are above them in order to get 97 points.  However, I made a mistake in where they were at in points at that time (74 not 76), which means, I have to adjust my prediction and remove 2 points, so I'll take it from the Canadiens loss, who were up on them in the standings at the time of the game.

After four games, the Oilers are one point back of what I should have predicted.

I now need to adjust one game prediction.  They'll beat the Bruins in regulation.

It's a tall order.  They'll need at least 90 to make the playoffs.  The worst spot to end up is in the 2nd Wild Card position to be playing either Hawks or Wild in the first round, who will either be #1 in the Western Conference.  I'm hoping for the Ducks, which means the Flames 9 game winning streak needs to end, and end now! 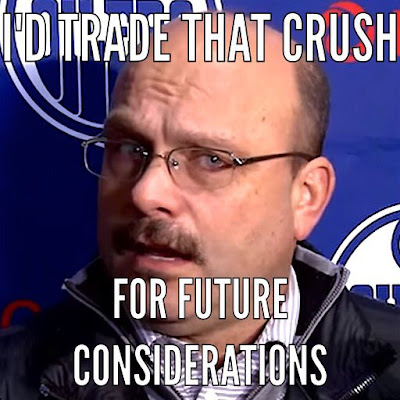 POHOGM Peter Chiarelli didn't go fishing in the big lake of players and goalies to prop-up the line-up for a playoff run.  His confidence in the current crew to steer his ship is quite the leap for many of us who, from a Cup-contender perspective, do not see a complete team.

The goal at the outset of the season was obviously to improve and hopefully squeak into a wild card spot, but they exceeded that and levelled out to be consistently in the #2 or #3 spot in the Pacific, jousting with the Ducks.

The team isn't without its issues although not as far glaring as in previous years.

1. The top line, although I've questioned Draisaitl's conditioning as of late.

2. Cam Talbot -- Many have suggested he's been the real MVP of the year, not McDavid.

3. Mark Letestu -- who excels when there is one less skater on the ice either way.  I wonder if growing up in a remote town like Elk Point, Alberta ingrained the idea that more open space is preferable and easier to work with.  Having him centre the 4th line is a good home as he props-up Hendo and Kass or Pak quite well.

1. Middle six forwards -- Their lack of production, faceoff wankery, and ho-humbness hasn't been a difference-maker.  They're average at best.  This is an area where Chiarelli at least addressed one spot by trading for David Desharnais.  I was always leery of NCAA-talent Drake Caggiula slotting right into the 3C spot in his rookie year.  He's got skills, but I think a stint in the AHL would do wonders for his confidence.  The Oilers are near last in faceoff percentage.  Tough to win on special teams and 6 on 5 when you aren't the first team to possess the puck.

2. Defensive Puck Mover -- While improved, there are times when I still shake my head with their inability to bring the puck up the ice and even make that first pass.  In their own zone, there is a good crew that is able to get the puck back and be relentless on the opposition, almost unforgiving, but after that, the giveaways are really really killing this team.  Against the Blues they gave it away NINE TIMES to ZERO.  You wonder why Cam Talbot leads the league in shots faced?  That's why.  Finding that right-shot offensive-defensemen quarterback is crucial if you want to make a Cup-run and why the Sharks with Brent Burns have a great chance of making it to the Final again.  Further, setting up the powerplay is accomplished by having such a defensemen.  Yes, that guy was supposed to be Justin Schultz, who's thriving in Pittsburgh, but it's a different game out East.

3. Backup Goalie -- Chiarelli is confident in seeing MacT's Smid trade for Laurent Brossoit improve at practice.  When I saw that he didn't trade for Bolt's goalie Ben Bishop, which L.A. smartly did, or Nuiverth from Philly, or Halak from the Isles, it told me right there that Pete didn't think the Oilers would go deep into the playoffs, but if they did, Talbot would essentially be backing up himself.

4. The Farm
With further trading for depth and AHL talent in big forward Fontaine and huge right-shot defenseman Ryan Mantha, Chiarelli is seeing a longer-game here with the whole organization.  There needs to be more depth in the Bake and with a pile of RFAs on the block, more competition results in more incentive, which causes your big league bottom six and bottom pair to pay attention or you end up buried like Mark Fayne or a yo-yo call-up like Anton Lander.

And this matches with my prediction that the Oilers and McDavid will get the same number of points as McDavid's number.

This will put them slightly behind the Ducks, meaning the Oilers won't get the home-ice advantage against the Ducks, but they'll still beat them in the first round.

Why?  Because Oilers fans are going to go absolutely crazy fanatical again like 2006 and the rise of Oilerism as a religion will dominate the city.

I have never left said religion--as there's something to be said for wandering in the desert for 10 years where there were no fish to catch.