As you all know, during Oilers home games, two Canadian military personnel are honoured and "Hendricks' Heroes" is displayed on the screen which shows the player giving jerseys to those who serve.  It is always a proud moment for our city and even though the player is from the U.S., he still felt it necessary to do such a thing.

So if there is one player I will miss more than any that have departed the Oilers over the past 11 years besides Smytty (although he did return) it's Matt Hendricks.

When then-GM Craig MacTavish traded goalie Devan Dubnyk to Nashville for Matt Hendricks I thought, "Who is this guy?  I've never heard of him."

Then he started playing and he brought that toughness the team so desperately needed.  And by toughness, I mean sacrifice.  Never afraid to drop the gloves. 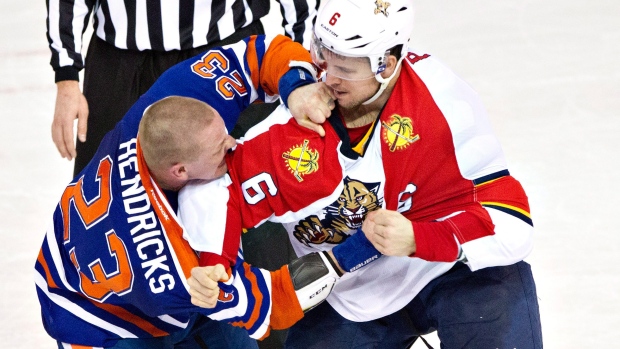 Never afraid to block a shot.  Never afraid to check a guy into his bench.  He was the sort of player you could not help but love.  And don't forget "The Paralyzer" shootout deke move he patented.  Or yes, the puck to the jewels he took even at a time when the team had no hope of making the playoffs. 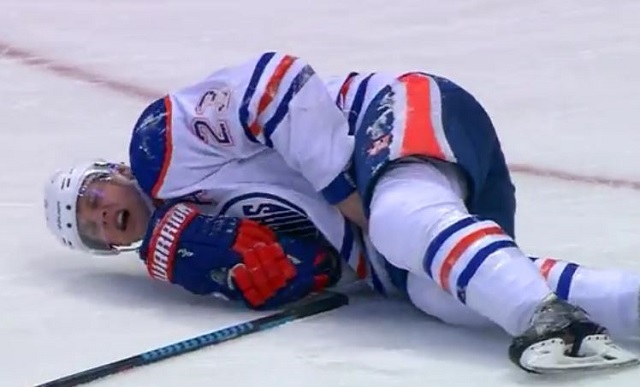 Edmonton Journal stalwart Oilers guy Jim Matheson wrote a nice departing article about Hendo here.  Jim is correct when he says Hendricks will likely become a coach.  He's got that respect, locker room presence, and knowledge of the details of the game that will benefit the players that play for him.

The Oilers video at the beginning of the home game shows Hendricks holding his child at home and then training with a quick clip of him screaming at the camera.  It gives me chills.  It always will.  It shows he knows what it means to be a father and to sacrifice.


During the playoff run, when I saw video clips of Hendo in the Oilers locker, fully dressed in uniform and gear, going by each player and pumping them up, I wondered that this was a bit odd for a benched player to be doing this.

But the iced players wanted him there.  It just goes to show what Mark Messier said a year ago is so very true.

"It's very simple. No individual can win a championship on his own. It's just that simple. You need a lot of support, you need a lot of people thinking the same way, all in alignment. You need the heart and the dedication and the character to make it happen.
"We realized that. When you win, the stage is big enough for everybody. You've got to make everybody feel that their contributions are just as important as the next guy's no matter whether it's 30 minutes a game or two minutes a game. Everybody's got to feel that they're important.
"If they don't bring their best every game, you have zero chance of winning there. We were able to convince everybody that came here that they were important and we needed them."
Mark Messier
at the Farewell to Rexall Place Ceremony

As he's a UFA on July 1 and unlikely he'll be resigned with the Oilers, we can only wish Matt Hendricks well on signing with another team.

He gave it all every game and when he arrived, he brought character to a team that didn't have any, And as fans, we should be grateful and thank him for his sacrifice and his time as an Oiler.

For me, he'll always be Hendricks the Hero.

Oilers lost but they won hearts back

Another game 7.  Another disappointing loss.  For those fans who weren't around in 2006, I say "another", because we had the same feeling.  We also had hope for the next season. And the next. And the next.

Now THAT was disappointing.  I'm sure you'll take a game 7 disappointing playoff loss over ten years of not even getting to have that feeling, 97 times out of 97.

While there have been thousands of us who have stuck with the team through thick and thin, through several complete roster, coaching, and management changes, with the hope and belief of a better tomorrow, and unconditional love, this season end and playoff run has:

1.  Instilled excitement and awe from new young fans (see photo).  Yes, Connor McDavid most certainly has a lot to do with that, but you must include Cam Talbot, Leon Draisaitl, Patrick Maroon, Milan Lucic, Oscar Klefbom, Adam Larsson, and Darnel Nurse, among others into that mix now. Several years ago, many kids couldn't really name any of Oilers, let alone bother to watch them, because their parents didn't either.  For you die hard parents who did watch them with your kids, you can't tell me your son(s) and/or daughter(s) didn't really have a favourite player--maybe Hall or Nuge, but not to the level of McDavidom.  When parents are excited, kids are excited, and then the parents are even more excited that their kids are excited.  It's a happy feedback loop.  It's contagious.  The kids are future season ticket holders.

2.  Woke up the crowd at the arena.  Holy wow was it quiet during the season.  It was being called Rogers Library.  Maybe we were just simply in tune with every nuance of the game and didn't like the distractions of cheering loudly.  That first playoff game was magical.  Every hit, every pass, every shot, blockshot, save had the crowd awing and ooing to noise levels comparable to some of the goals during the decade of darkness (DoD).  So loud.  So awesome.

3.  Brought people together.  I pretty much watch every game.  Even during the DoD, die hard friends or my dad and I would get together to watch.  But now everyone wants to watch.  Friends and family who didn't watch before love watching now.

4.  Made us hate the refs.  I won't go into detail, but man, something has to be done. Hello, team owners!

I have this feeling that as we analyzed players and games over the last ten years, that we were able to somehow, but not really, bring this team to a higher ability winning level so that new and returning fans can enjoy this "thing" called the Oilers for years to come.  You're welcome?

Maybe it was the false sense of pride we had during that time when Lowe and Co. made the team shittier and shittier, so that the hockey gods looked down upon how freaking dedicated we were, and granted us the Golden Ticket and the gift of Connor McDavid.  But I don't believe that anymore.  There has to be the components that bind the team together.  Mark Messier used to say that every single person on the team is important.  These Oilers have finally learned that again.

Throughout all of this, for all of us, and the players and staff, the most important thing is that the players:

And for that, we can be grateful, and ever hopeful.

In every series, there always seems to be that one guy no one expects to step up.  For the Oilers it was Zackassian in the 1st round.  In this one, it's Jakob Silfverberg.  Before the puck dropped, my wife and I commented on how this guy was dangerous.  I think we'll stop saying these things from now on, but I'd like to take that extra and unnecessary "f" in his name, add some letters to it and give it back to him, if you know what I mean.  I'm not saying I don't like the guy, but damn.

Oilers deserved to win game 1.  They defensively shutdown the Ducks and potted 3.

Oilers didn't deserve to win game 2.  Anaheim outplayed them, but the puck luck was with the Oil.

Oilers didn't deserve to win game 3.  They were outplayed in periods 1 and 3.  Goaltending wasn't up to snuff, but neither was the Oilers defensive game.

But in game 4, it's a different story.  Did the Oilers deserve to win the game?  First period was Oilers Oilers Oilers, but then they took some dumb penalties, and got into serious trouble in the 2nd period.

Then the Ducks had their "7th man":

Offside, no coaches challenge left for McLellan, but goal.

Even the smart learned CBC/Sportsnet panel of MacLean, Kyprios, Hrudey, and Friedman all agreed on these bad calls.  When THEY agree, then I'll tell ya, the NHL had better do something about the crappola shit-reffing.  Every fan in every series is commenting on how bad the refs are this year in not enforcing the rules, but particularly the absolute inconsistency.

Luckily the Oilers poured it on late in the 3rd and The Drake potted one in front to tie it up to go to overtime. Relief.

Then icing by the Ducks was marked by the 1st linesman with his hand up, but it was waived by the 2nd linesman, seemingly thinking Klefbom could get to the puck in time, which he absolutely could not, and then the ref got in the way in the corner, a soft battle on the boards, and next thing you know, the puck is in the Oilers net. More on that in a sec.

No excuse for Jordan Eberle to not only make one, but two soft plays. I'd say he looks like a rookie out there, but he was better as a rookie so it's an insult to his former self.  Already in his bad books, Coach McLellan promptly relegated Ebs to the 4th line and then benched him for many shifts with Anton Slepyshev moving up the lineup.  He's way faster and harder than Ebs and actually shoots well.

Then Nuge actually gets the puck in front of his net for a split second, but because he doesn't swiftly shoot it out like the instincts should make you do, Getzlaf treats Nuge's stick like a paper doll and pots one past Talbot.

In OT, icing or not, a soft play on the boards by the Oilers young D, and Getzlaf has no trouble retrieving the puck to dish it to none other than Jakob Silfverberg left alone in front for a zapper of a shot.

And you know, if that was Eberle on the other end, he'd have caught the puck in his catcher's mit-of-a-stick, held it there for 8 seconds, and lobbed a soft wrister right at Gibson.

Soft plays against a hard team will kill you.

And that, my friends, is how the Oilers are finding ways to lose.