toward being a solid playoff contender.  I can't believe we're finally talking about playoffs, by the way, and it's a great feeling.  Although many of us have learned our lessons of hope and disappointment, like an ugly kid at a school dance, we wait until the next year with a wave of new students attending who we might impress them to think we're one one of the popular kids, then a couple months in, they see that we're posers. 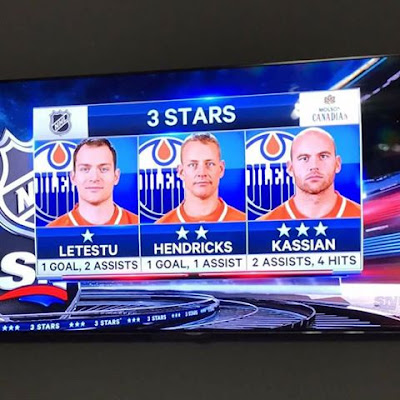 I'm not saying I was one of those kids in school--I was too busy playing sports, but I didn't really go on a lot of dates either, not that I didn't want to.

Not only do the Oilers have some popular kids like McDavid, Eberle, Draisaitl, and Nuge, they have the bullies like Lucic, Maroon, Hendricks, Kassian, and Gryba, plus Nurse.  Then there's the scrappy guys who some don't realize would probably kick your ass like Larsson, Russell, Caggiula, and Letestu.  And with that wrecking crew, no one should touch the kids, right?

Wrong. We're still seeing McDavid get held, grabbed, and molested. I still believe those aforementioned bullies need to step in more and sacrifice--especially Lucic.  That's what he was signed up for, right?  That said, players are defending each other, something you didn't see as much before.  That's what a real TEAM is supposed to do.

The recent Arizona game was a testament to the Oilers establishing themselves this season in beating a team they never beat in regulation.  It was a nasty win with Zack Kassian literally leading the physical battle in defending his linemate Hendricks against Ekman-Larsson's take down, then dropping his gloves waiting for Shane Doan, then getting taken down by the linesman... just look at his face here... 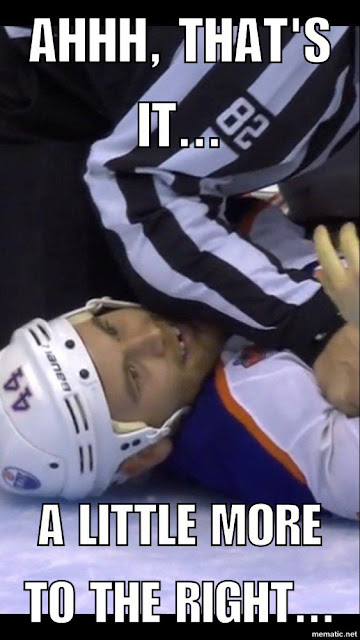 So against the Kings, even with, Reggie Sekera, their top d-man out with illness, the defense played well, Larsson was incredibly solid in being able to handle the big Kings lineup, stopping Taffoli and Kopitar in their tracks.  It was plays like that which made believe in the Hall-Larsson trade even more.

No longer could the Kings tire out and outlast the Oilers--nay!  It was the other way around.  Even the mighty Drew Doughty, in playing 79 thousand minutes, got tired, and Draisaitl and McDavid were there right on him each time to take advantage with good chances the other way.

The biggest difference this season over the last is not just having way fewer injuries to top players, it's that all teams now have to respect the Oilers--not just because of great skill, but that at the same time, they are arguably the toughest team in the league, physically, skill-wise, and in goaltending.

And that, my friends, is the next step.

Oilers keep their heads above water, but are they in over their head?

So the analogy goes.  After the 1/3 mark (28 games and 54 to go), the Oilers are one point ahead in the Pacific Division.  There is no doubt, they could be much further ahead if they had given it that extra push when it counted.  They have 4 overtime/shootout losses and that's 4 lost points right there and 5 games they lost by 1 which they could have realistically won 3 of them, so that's 6 points, and 10 points total, putting them top in the league.

That said, they are on the playoff bubble and a small streak of losses could see them looking on the outside.

When you see defensive-zone mistakes where players are out of position or not picking up man, not back-checking, or staring at the puck too much, little mind-blips can cause the other team to score in a blink, a loss, and no playoffs.

In the East, there are currently 6 points (3 games) between 1st and the last Wild Card spot, and 6 points between that and last place.

The Oilers are only 4 points (2 games) out of a playoff spot, and the have games in hand on other teams, so any fan who sees the Oilers breaking through this year will surely be disappointed.

They are still not a complete team, and STILL have glaring holes in the lineup.

A couple more injuries to any of those players, and the Oilers are doomed and will miss the playoffs.

Not having Davidson or Nurse in the lineup hurts this team and will hurt as Dillon Simpson is about to make his debut from the AHL.

Jesse Puljujarvi has scored only one goal and has 7 points in 21 games while Drake Caggulia has 5 points in 10 games.  As I've said many times, if the Oilers do not send Jesse down to the AHL before game 38, it will still glaringly show the lack of vision of player development.

But at some point, that bubble will burst.