- He dazzles! He amazes! #Oilers #BillyMooresCup

A friend and I attended Rexall Place for the Billy Moores Cup--where two Oilers' prospect squads played two periods of 4v4 then seven minutes of 3v3.  But, yeah, we were there for one reason and one reason only.

We got there an hour early and the lower bowl was already starting to fill up, but we got 12th row centre ice.  Twitter photos on the big screen started showing big lineups outside 30 minutes before puck drop. 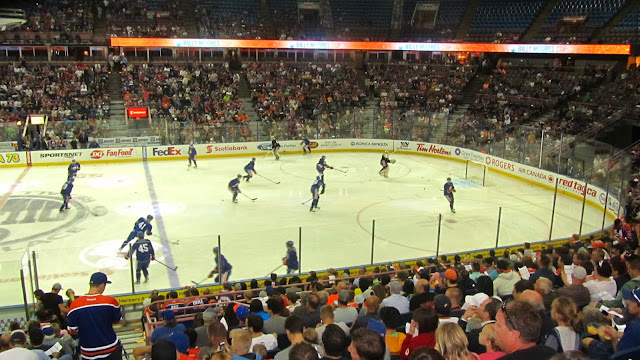 Prior to the game, the beginning tribute and moment of silence to Constable Daniel Woodall followed by his wife and two small children dropping the ceremonial puck between McDavid and Draisaitl was beyond heart-wrenching.  Edmontonians watching and in the building felt as one at that precious moment. Then the Wizard took the ice and started playing.  As much as folks have been calling him McJesus, it's not proper.  It's not proper because Connor McDavid, last night for me anyway, hath started his own religion.  McDavidism. McDavidianity.

In his first goal, he went around the right side of a guy in the slot, then as he looked like he was going to attack the net, he goes around it and backhands it in off the post--with the goalie finally arriving. 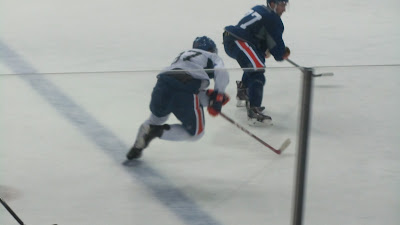 He seems to move forward in time, and so when our glaring eyes have finally caught up, it's too late. The puck is already in the net.  So much so that when Leon Draisaitl scored on McDavid's team with a really nice goal and the fans cheered and cheered and a centre ice face-off ensued, the puck was already in the other net.  The Anointed One won the face off, put on his Lord of the Ring, disappeared in time for a moment, skated through Drats, then reappeared with seventeen deke moves to put the puck in the net.  We were all asking, "What just happened there?  I'm still celebrating Drat's goal for crying out loud." 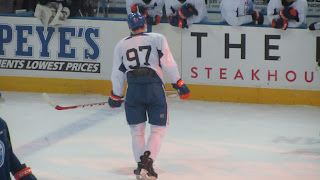 His other four goals had the same dazzle and magic--nothing like I've ever seen.  I'm serious when I say that.  I sometimes wonder if there's glue on his blade; he makes the puck stick to it somehow.  His body and hands work in unison but separately.  While his feet and body move one way to trick the goalie, his hands are already potting the puck.

I was so caught up in the moment that I started cheering "LET'S GO OILERS!" which means you're cheering for both sides.  After Connor's 4th goal, we all just started laughing because he almost made a mockery of the game--but because he's so humble, we knew he wasn't, so the laughter really was just pure joy.

Not to be left out, Darnell Nurse was a beast on the ice with some pretty flashy moments. I said it two years ago--he's a hell of a skater for a tall lanky guy, but he knows how to move the puck with pizzazz.

If this really is a new side-religion stemming from Oilerism, then sign me up, take my money, and take us to the promised-land for I shall praise thee, O gracious Anointed One, in Your Name, Amen. 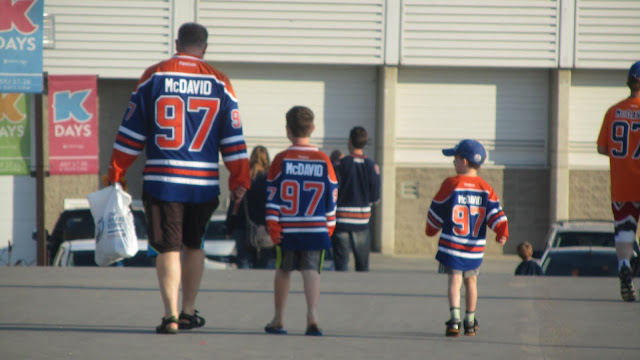 Now check out the highlights of his goals here.